For obvious reasons Friends of Chelsea Park (FoCP) and indeed Sheffield City Council’s Parks and Countryside team were stymied last year by Coronavirus. Work was due to have commenced last spring on improving the drainage and surfaces, then replacing swing equipment because the timber supports are rotting.

Fortunately the prospects for the new year are more promising. SCC officers have been carrying out further investigations on the site drainage, which is key to making the playground safe over the long term. They have established that the lower area (where the swings are) had been installed over a layer of hardcore to assist water run-off as we hoped, but that this has probably silted up over time. The plan is therefore to remove all the swing equipment, which needs replacement anyway, together with the roundabout, which also needs to be replaced, and the much-loved camel needs to be fed and stabled then groomed, till it’s safe to put him back. The whole area will then be scraped, so that a new layer of clean gravel can be laid, with a membrane to prevent soil and silt from washing down into the drain. 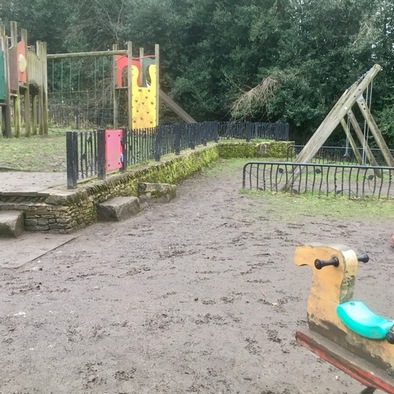 When that’s done and a new permeable wearing surface is laid, both the bigger children's and toddlers’ swings (making provision for disabled children as well), will be replace with new metal-framed equipment, as will the roundabout.

The adventure play frame on the upper part of the playground will also need to be replaced as it is also timber-framed and starting to rot, but it possibly has a few more years before it becomes unsafe. We aim to embark on wider consultations with both children and their carers, parents and grandparents to establish exactly what we should replace the adventure frame with?

General opinion among the Friends of Chelsea Park steering group is that this little playground is more suitable for young children than bigger ones, as it is this smallness that makes it safe and special. We therefore intend to continue to focus on play for under 10-year-olds, rather than the more death-defying equipment favoured by older children. I trust that is acceptable.

Unfortunately, financial support for ambitious play ground development in this part of Sheffield is seen as less of a priority for a cash-strapped council than it is for less well-off areas, which we understand. We will therefore need to embark on a serious fund-raising campaign if we are to keep the facility, or maybe undertake other work as well. Fortunately Chelsea Park already has an interest-earning endowment fund, managed by the council, that is dedicated to the upkeep of the park, of about £23,500, which should pay for most of the initial works to the swing area, but that will not be enough to pay for replacement of the adventure play equipment and upper play surfaces as well. This may cost another £15 - 20,000, which the community will need to raise. That sounds, indeed it is a lot of money, but fortunately there are some big charitable trusts in and around the city who may be able to help and we have already received donations of over £2000.

Fund-raising should include smaller more local initiatives as well as big ones. Nether Edge Festival are considering a fun-run to help. Residents may also have other fundraising ideas or suggestions for the playground or indeed the wider park which we would be delighted to hear about. Please contact friendsofchelseapark@gmail.com with your ideas. Please say if would like to join the FoCP steering group as well. It is already a strong team, but fresh ideas are always very welcome.